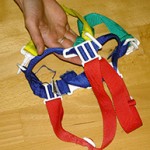 A device to help parents with disabilities to pick up the child from the floor.

No harness is needed when the child wears overalls with straps.

Babyland and other children’s stores

Five-point harnesses with a strap in the crotch are now available.

PICKING A CHILD UP FROM THE FLOOR

A technique for people with low tetraplegia whose children can stand on their own.

LIFTING AN INFANT UP FROM THE FLOOR

Lifting an infant up from the floor – a technique for people with tetraplegia.

The parent figured out the technique when his baby was small and couldn’t stand up by himself. Now that the child knows how to stand he uses a different technique. 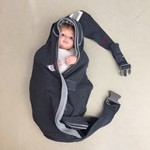 A cross between a sling and a baby carrier that can be buttoned on the back. The baby is carried half reclining diagonally across the chest and hips.

The baby carrier/sling worked well when I was out and my baby slept. I could move in freely around in town during the baby’s naptime. It works well up until one year of age.

A soft cradle for a baby to lie on the parent’s lap.

A soft cradle with a firm bottom. The lap cradle is strapped around the legs with a wedge-shaped cushion that tilts the baby inwards on the child parent’s lap. The baby is also strapped into the cradle. The solution is like having a small baby carriage/pram attached to the parent’s lap. According to the manufacturer the cradle is suitable for infants up to about 3 months.

A lap cradle made by Mayday Aid

Can be rented, for example directly from Mayday Aid.