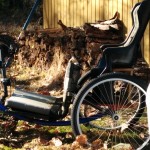 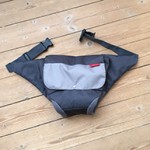 Simple harness to hold the child in a chair.

A harness without shoulder straps is used to secure child in highchair.

The same harness is used when the child sits on the user’s lap; see the tip “harness for child sitting on lap.”

A highchair without legs that is suspended directly on the table.

A highchair that hangs directly on the table. The chair is completely flat when folded. Easy to bring along and easy to mount on the table.

It was really nice not to have to deal with fitting the wheelchair between the legs of the highchair. I lifted the baby up with one elbow on the table for extra core balance. On the negative side, that the highchair is fairly deep so we placed towels under the child to reach the proper height. Another problem was that the table had strip of edging under it. Sometimes this edging and the attachment for the highchair “collided.” But in general this was a great chair that could easily be brought along everywhere.